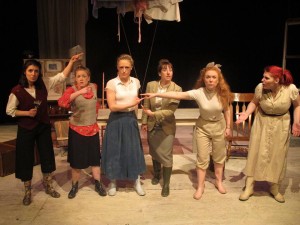 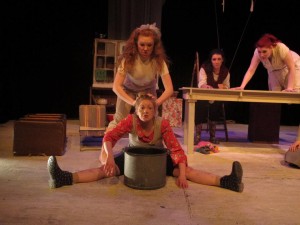 Award winning Haste Theatre in collaboration with director Ally Cologna is proud to present Beyond Cragporth Rock, a devised production.

Beyond Cragporth Rock invites the audience to join a rollercoaster ride of bleak laughs and horror. The lights rise upon a bizarre sprawl of bodies. Six sisters, living in a ramshackle cottage on the edge of an eroding cliff, explain differing versions of their mutual demise. Beyond the four walls lies a nightmarish, futuristic world plunged into dystopia by economic crisis. Afraid of the outside, the sisters live in constant fear of faceless foes and unspecified attacks. Here we find them ten years later, fresh risen from their own deaths to tell their bizarre, back-to-front story.

A nerve-jangling, one-act tour de force, Beyond Cragporth Rock comes with a capella harmonies, clashing egos, murder and a few surprises along the way..